Home Our Dogs Guess the Breed

Okay Puppies, I have a challenge for you. You have all met Maverick through the last couple posts and seen some pictures of him. A couple puppies asked about his breed. Well, to be honest, I do not know his breed except that he is a mix. On Petfinder, people usually search for dogs by breed and we can match dogs with the right family more efficiently if we list the right breed. So now I am coming to you to tell me what breed Maverick is. I will include some clear pictures of him as I share his story so you can all take a good look. 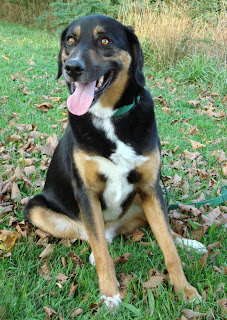 Maverick came into the world as a result of an irresponsible owner allowing unneutered dogs to roam. That owner was a neighbor of Maverick’s first papa, who helped find homes for the puppies, but kept Maverick for himself because he looked different from all his white, fluffy littermates. Maverick was a wonderful family dog for several years. He is an excellent listener, following all basic commands, and well-mannered in the house. Then the parents in his family divorced and the father moved to a new home. Not long after that the older child grew up and moved into his own home. As Maverick’s family broke apart, he developed more and more severe anxiety. When the mom and younger child took Maverick to a new house, he became destructive in his anxiety. Thunderstorms terrified him. When left alone, he was destructive toward the door where he saw his papa leave and toward his papa’s bed, shoes, and other things that smelled like him. Maverick’s papa sought for help from his vet, but eventually he recognized that Maverick would only get worse as long as he continued to be left alone for long work days. He contacted MaPaw because he knew we could find Maverick a home where he would not be left alone and afraid. 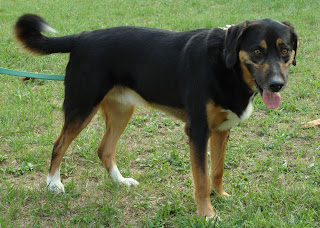 Okay, now that you know his story, I will tell you a couple details that might help you select a mix of breeds. He likes to carry his toys and give them to Mama and Papa. He does not chew them or play with them, he just carries them with a soft mouth. He barks at noises outside the house and at other dogs when we are out for a walk as if he is guarding our pack. 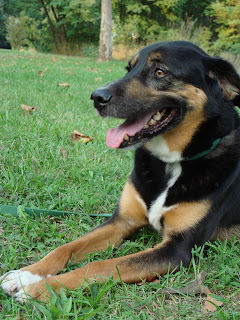 Okay, take your guesses. I will consider all your breed suggestions and anything I hear from people who meet Maverick. Then we can update his Petfiner profile and find him the perfect home.