Skip to content
Home Our Dogs A Year in Blogging

A Year in Blogging 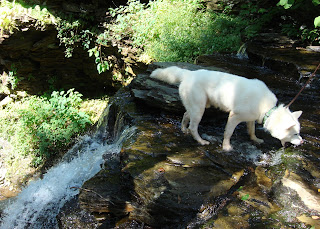 Hey everypuppy, I’m BlueBlueBlue! Magnum gave me the super big honor of posting about the anniversary of the MaPaw blog! I think it’ll be loads of fun. Okay, so first I had to ask Magnum all about how he started blogging and whatnot. All that happened when I was still living my previous life as a chained dog. So here is the story as I understood it.

It all began with a blue-eyed Rottweiler named Meeko, who you may remember from Indy’s blog. Indy fostered Meeko for a little while and then Magnum fostered him for a little while until he found his forever home. So before Meeko came here Indy’s mom sent my dad a link to Indy’s blog. My mom and dad checked out the blog and thought it was really cool. They read a bunch of posts and talked about how cool it would be to blog about foster dogs because they could capture more pictures and more personality than on the official website. Well not too long after that Harley’s mom asked the MaPaw people if anyone would be interested in a MaPaw blog. My mom and dad said, Yes! We’re interested, so Harley’s mom set it up for MaPaw and made the first post.

Anypup in MaPaw could post, but Magnum really took to it and posted a lot until puppies just started calling it Magnum’s blog. Of course if it was really Magnum’s blog, he wouldn’t talk about anything except kibble, bagels, and other food. So then… so that was how the MaPaw blog began. So then I asked Magnum why he blogs.
Well, obviously he likes to talk to other puppies from around the world. He enjoys the friendship and so forth. I think I will like that too, which is why I’m super happy that Magnum is letting me post now. Also, he says, he gets to share with everypup what it’s like to live in a foster home. He hopes other puppies will see what fun we have and then they’ll think about giving it a try because there are never enough foster homes. Okay okay okay… so in light of one whole year of blogging – a year in which you met over 40 MaPaw dogs, including one adorable litter of 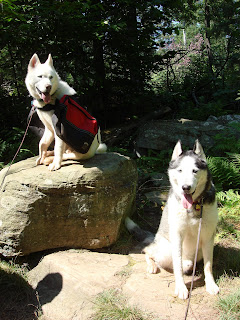 puppies, a year in which you rejoiced with us through our timely saves and happy homes and cried with us through our sick fosters and sad goodbyes – we have decided to introduce a new feature to our blog. No, it’s not just that I’ll be posting sometimes now, although I will be, it’s that we’ve signed up for e-mail! You can now e-mail us anytime you want to chat. So, if you have questions about us, Siberian Huskies, MaPaw, rescuing, Leukotriene D4 Receptors, dog behavior and training, life in PA, fluid dynamics, or fostering, just ask! Okay, so maybe we wouldn’t be too helpful on one or two of those subjects, but we might surprise you.