Ace came to us food-aggressive, stinky, filthy, dehydrated, malnourished, and filled with parasites. This poor boy was only six-months-old and had spent most of his young life alone in a shelter with no home to call his own. He was just another disposable dog to the family who dumped him at the shelter.

Ace is one of the lucky ones. His food aggression made him more likely to be euthanized at the shelter, but MaPaw saw past his understandable flaws and took Ace to a foster home for the love, care, and training needed for his recovery. For several weeks Ace did not trust anyone, but he made tremendous progress with his foster family. When he first arrived at his foster home he growled and snapped around food. He ferociously protected his food from both humans and other dogs. Even a small morsel on the floor was a battle ground for him.

Day by day, Ace’s foster family worked patiently with him. After time he learned he did not have to fight for his food because he was now safe. Slowly he learned to forgive and forget his past and enjoy his days with his foster family and furbuddies, running and playing together. Ace blossomed into a loving fuzzbutt who came for treats and took them nicely. He became a typical, fun-loving, mischievous Husky pup who kept us laughing with his stunts. He had the zest for life seen only in a dog who was so close to death and given a second chance. He no longer had those empty, scared, cold eyes. They were now filled with love and sparkle. Ace made a remarkable breakthrough and was ready to be adopted. 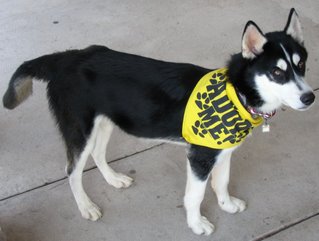 Since Ace had a horrible past we knew it would take a special family to understand him and help him continue on the right path. He had made incredible progress and we didn’t want him to regress back to his old habits of fighting for food and attention. We patiently waited for the right family as applications came and other Huskies were adopted.

Finally, MaPaw received an application from a family who would love Ace unconditionally. They had three other dogs, including Casey, a former MaPaw Sibe. The family was knowledgeable about the breed and about how to help Ace with his new path in life. Ace met his new family and fell in love at first sight. He played and played with his new furbrothers until he wore them out. He gave his new human Mom & Dad kisses and happily ran through the house looking for toys. We made arrangements for them to adopt Ace.

On the way to their house for his big day, Ace recognized the neighborhood and was so excited he jumped all over the car. Although he always walked nicely on a leash, he pulled to get out of the car and to the front door. He quickly made himself at home finding toys and a nice bone to chew. We completed the paperwork and played for a while before saying our goodbyes. Ace gave a kiss goodbye and was off playing with his new pack, The Fantastic Four! 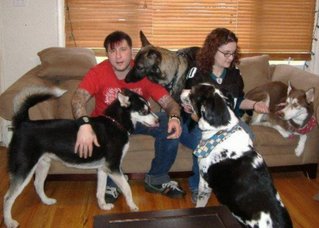 This ending was a very happy one for a pup who long ago was forgotten and dumped at a shelter where he had no place and no one to call his own. This wonderful pup will no longer be sad and lonely again. He will only know happiness.

God bless you, Ace, our Little Wolfie. We will always love you!