Hi Puppies, today is a great day to give extra fuzzy hugs to your people and your siblings. Also, claw them and sleep on their heads to fulfill Doodles dream of honoring our leader Queen Meeshka. Today I will post about some people and puppies who recently found love.

A wonderful family who lives in Pittsburgh, PA had some extra love to share and decided to find some puppies who really needed extra love. They knew they were Siberian Husky people, so they called and visited rescues and shelters, trying to find Sibes who were looking for a new family. First, they found Gabi, who was a little frightened by all the new surroundings. The family was gentle and patient with their timid, little girl. They were thrilled to have her, but thought she needed a boisterous sibling to help her be more social, so they continued their search.

Meanwhile a very handsome young Sibe named Cosmos was waiting in his foster home in MaPaw. Cosmos had a very sensitive tummy, so his foster parents tried and tried to find the right food for him so that he would not have an upset tummy. He enjoyed playing with his foster siblings and telling long, woooowoooowoooing tales to his foster family and everyone in his training class. Although he was friendly and playful, other people passed by him without a second glance.

One person showed an interest but then met him and, upon seeing his beautiful rust tone, said he was not red enough. Humph! Cosmos had learned excellent manners at class and found a food that agreed with him. All he needed was a family. The family from Pittsburgh came across Cosmos in their search and wanted to meet him.

They drove several hours across the state to introduce Gabi and Cosmos in his foster home. Cosmos could barely contain his excitement and greeted Gabi with many wooowooowooooos. At first she was unsure, but Cosmos’ exuberance soon overcame her shyness and she ventured out to meet the new people and puppies. Her family said they had never seen Gabi be so social. Cosmos seemed to know it was his big day and gave hugs to his new family. After Gabi and Cosmos had some play time, they all piled in the car to go home. 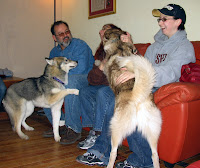