Skip to content
Home Our Dogs Burning the Midnight Oil

A stray dog wandered up a long, gravel drive in Pittsboro, North Carolina. He heard the sounds of other animals and hoped to find food, companionship, and shelter from the freezing rain. Although he had just one cloudy eye, he could make out the shapes of a garden with dogs, guinea hens, chickens, cats, and goats on the other side of a fence. He pawed to get inside. 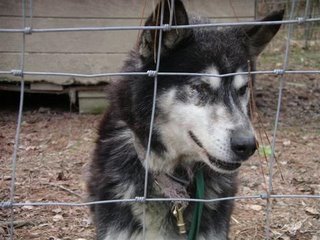 The skinny stray had found the home of an italian artist and animal lover, Siglinda. The artist came out of her house with food and a leash, intent on helping the little lost Husky. He was already wagging his tail at the other dogs and did not hesitate to approach Siglinda and take a treat gently from her hand. As she attached the leash, Siglinda noticed a buckle that must have kept the little Husky on a chain at one time. He followed her quietly to a pen where she was able to give him fresh water and food. After that he really wanted to be with her and her dogs, but she was concerned for the safety of her birds and cats. He didn’t like being penned, even though there was a warm, dry place to rest in there.

Later that morning, Siglinda took the stray to Dr. Terll at Hill Creek Veterinary Hospital. While waiting for the doctor, Siglinda took a bunch of paper towels and started to dry the little Husky and take away all the clumps of fur he had hanging all over his body. At one point he stopped her and licked all over her hands and face. That day she found out he was heart worm positive and in need of vaccinations and deworming.

At night the dogs and cats gather inside around the wood stove to sleep. Siglinda lined a big crate with a blanket where the little Husky could spend the night without troubling the cats. All the cats understood and immediately found high places to perch while observing the wild creature Siglinda was holding and pushing into the crate. Siglinda could not close her eyes that night in fear for her cats and knew she needed to find another place for this homeless dog to stay. She sent messages with photos to every person and organization she knew that might help a little Husky in need.

A friend found a place to board the little Husky until they could find a better solution. For the next two weeks, Siglinda received an incredible number of e-mails, and it became clear that groups from California to New York were trying to find a home for this little Husky. Then one morning the phone rang and it was Kathryn from MaPaw saying she had a foster home for the little Husky. From the boarding veterinarian, the little Husky stopped at Siglinda’s home for a kiss of gratitude and farewell before going quietly with another friend to begin his long journey.

Through the entire day the little Husky rode in different cars, stopping at rest stops along the highway to get a breath of fresh air before going off with someone new. He rode quietly, looking out the windows to see how quickly he was traveling from where he had been to wherever he was going. He rode late into the night meeting new people and loading into new vehicles as snowflakes began tumbling from the darkened sky. Along the way some of the people started calling him Jasper, in memory of Jasmine, another one-eyed Husky who had touched so many hearts.

It was after midnight when Jasper reached his foster home. He was exhausted and anxious when he met his foster siblings, who had climbed out of their warm beds to see who arrived in the middle of the night. After a quick sniff of his new surroundings, he went directly to his new crate and sank into his dreams.

Thank you to the network of transporters and volunteers who made this journey possible. Special thanks to Siglinda, not only for reaching out to a dog in need, but also for her beautiful messages that were paraphrased throughout this post.