Our Dogs
Hello puppies. My name is Angel and I am a little nervous about making my first post, but Magnum is here beside me to help me if I need it. I used to live in the big city. I’d rather not talk about the people I lived with, so I’ll just say that they didn’t treat me as well as your humans treat you. I escaped from them, but I didn’t have any where to go, so I wondered around on my own finding food where I could. In my travels I crossed the grounds of a church where some people caught me and told me I was an Angel. 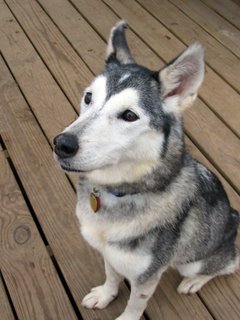 People in uniform took me to a place called a shelter. It smelled like hundreds of other dogs, chemicals, and fear. It was horribly noisy and I was put in a metal cage where I wouldn’t be able to hunt for my food. The people there gave me food and never hit me, but I was so frightened I couldn’t think. Then a strange man and woman came to take me. The last time I let people take me somewhere, I ended up here, so I figured it would only get worse. I put out my legs and fought to stay in my cage where at least I knew what to expect. They are bigger than I am, though, so they got me out and took me outside. I was glad to be outside and away from the smells and noise of the shelter, so I relaxed my tail a little and sniffed the grass. They took me to a car and opened the door. Well, I may be frightened, but who doesn’t like a car ride? I jumped in and went with them.

They drove me clear out of the city to a much quieter place. They introduced me to the four dogs who live with them. I wasn’t really interested but four is a lot fewer than the hundreds in the shelter. I started thinking maybe I like these people. Well, the best was yet to come. They fed me kibble and rice every day, four times a day! I couldn’t believe how much I was getting to eat. My tummy finally felt full. Of course living on the street taught me that you never know when circumstances 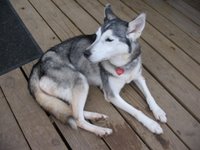 will change, so I wolfed down my food and searched for more. One time I was searching the livingroom and thought I was on to something so I growled to let the other dogs know that whatever I found was mine and they better just find their own. Well, you’ve met Lucky, but I think he’s not so bright because when I growled, sending a very clear message, he ran over to me and said, “Do you want to play?” I thought it was a trick and defended my possible food as best I could considering that he’s about twice my weight. I didn’t even get a scratch, which makes me wonder if he was even trying to hurt me, as I assumed at the time. Anyway, when that happened, the woman jumped up and yelled at both of us. I knew where yelling would lead, so I flinched and grunted preparing myself for the blows, but none came. In fact, after I flinched the woman stopped yelling and started talking softly again. I didn’t quite understand, but I liked it, so I decided to stick with her. I follow her everywhere now. Sometimes she waves her arms around and asks, “Could I take a step without tripping over a puppy?” I think it’s a rhetorical question.

I like the people so much I sit near them to try to get pets all the time. I tried to sleep in bed with them too, but they don’t let me do that. That’s okay because there is a soft place to sleep right next to their bed. I like it so much I roll around growling to myself every night when I’m getting comfortable. It’s been a while since I’ve been able to enjoy a good growly-roll. Then I go to sleep hoping I’ll wake up to breakfast the next morning.