One Saturday Carrie and I got a call about picking up a Sibe at the Perkiomenville SPCA, so we settled our dogs down, got in the car, and headed out. When we arrived at the SPCA, we signed some paper work, and the volunteers brought Rickee around the corner. “Holy Sausage!” Rickee was a normal height for a Sibe but twice as wide. As we tired to load him into the car, we were overwhelmed by a foul odor of stinky feet mixed with old moldy wood. This smell was so bad Rickee’s first stop was at the pet store to get a bath before he came home with us. During Rickee’s bath we noticed large hard masses, one on his chest and two down below his belly. We thought the worst about the masses, and after the bath he still had a funk about him, so again we thought there must be a veterinary problem causing the smell. 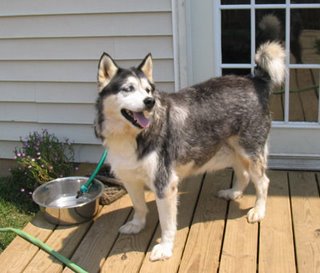 Later we learned that Rickee’s funk did not come from the kennel because he had only been there for a few hours, so it must have come from a life spent outside. Also, we learned that Rickee’s previous owner dropped Rickee at the SPCA with full knowledge that Rickee would be euthanized because of his age, nine years, and because of the extremely over crowded kennel. Rickee’s previous owner told the people at the SPCA that he was moving and couldn’t keep Rickee where he was going. We later found out he was moving just down the street to a new home on nine acres of land.

Rickee drinks and pees a lots, he smells, and has some large masses on his body; what will the vet be able to tell us about Rickee? Are there some underlying problems that caused his previous owner to give him up? NO, there is no medical problem with Rickee, he is just overweight. The smell must have come from his life as an outdoor dog who had to find a place to sleep on the dirt. His large masses were nothing more than large pockets of fat. Being a senior, he must not be able to hold his bladder very long, or maybe because he was an outside dog he never had to learn to hold it and he just went whenever he needed.

Poor, confused Rickee didn’t open up to us right away; he didn’t like hugs and didn’t give out kisses. He found a spot on our kitchen floor that we termed Rickee’s Property, because Rickee would bark at the other dogs if they would come near him, like an old man yelling at the young kids to stay off his property. Rickee also had a little food aggression that we worked on by constructing an assessment arm out of a Halloween arm and a stick with a grabbing mechanism. Eventually Rickee allowed us to give him big hugs, kisses, and even a belly rub every now and again. He lost weight while he was with us, reducing those hard masses of fat and increasing his energy for walks. 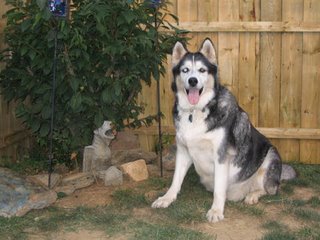 Rickee went to his new family on September 16th. As we pulled onto the street of Rickee’s new home we could tell which house we were going to by the balloons on the mailbox. When we stepped inside their house we saw a large banner that read “Welcome Home Rickee.” The family had purchased a giant bed, a food dish, and toys as soon as they got the news that they were approved. Rickee met his new friend, Thumper, without incident and seemed to relish in all the attention provided by the seven members of his new multi-generational family. He immediately made himself at home by peeing on the carpet and pooping on the kitchen floor, but the family took it in stride and started training right away that going to the door meant going outside. Rickee, who didn’t want to be touched by us when he first came to MaPaw a couple months ago, rolled onto his back for a belly rub from the toddlers. He was patient with them as they followed him all over the house and clearly understood that he needed to have more tolerance for the little ones. Since Rickee’s new mom is a veterinary technician, we can be sure that Rickee will get whatever veterinary care he needs throughout his golden years. Rickee was clearly happy to be the center of attention and the only dog. 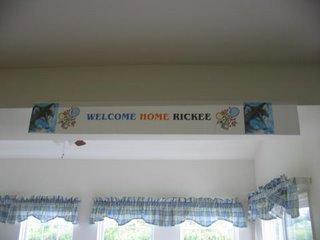 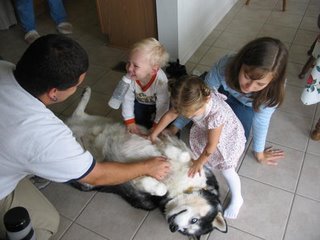 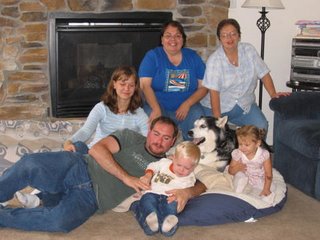