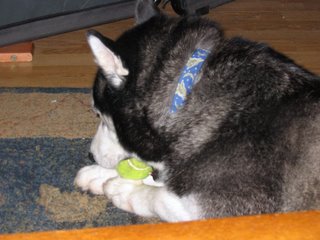 That’s who I am and that’s how I feel! I used to live with a nice family and a Labby brother, but I escaped the house and caught what I thought was a squirrel. Oops. That “squirrel” turned out to be a neighbor’s dog, who recovered from the accident. It was an honest mistake, but the “squirrel’s” owner wanted to kill me, so I had to make an escape.

MaPaw saved me, but they didn’t have any foster space open where I could stay. They said something about a movie with Huskies in it coming out about a year ago and making lots of people want cute puppies who then grew to be big, energetic, and too much trouble for those people. It sounds to me like those people didn’t plan ahead very well. I’m six-years-old and still very energetic. I love to give hugs and kisses and more kisses. 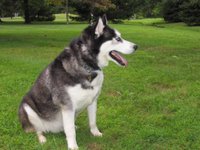 Anyway, I had to stay in a kennel for two months. It was the only way to save my life, but I hated it. I got very stressed by all the other dogs there barking and howling. I had a small indoor space and a small outdoor space that didn’t allow enough room to get the zoomies and didn’t have a soft place to nap. I couldn’t play with the other dogs and got frustrated when another dog was outside my run. Some nice MaPaw people stopped by to take me for walks, but it wasn’t enough. I needed to get out of there.

Well, here’s the part where I start to feel lucky. The MaPaw people who took me for walks showed up last weekend and took me for a car ride. I tried to jump in their car every time we went for walks, but that was the first time they actually took me for a ride. Boy do I love car rides! We stopped someplace new where the man took me for little walks while the lady kept going in and out of a house getting other dogs for walks. I walked with a Rottweiler who I had met once already, a Newfoundland, and another Siberian Husky. I didn’t understand what was going on, but I was happy to be away from the kennel so I gave the people kisses and hugs. 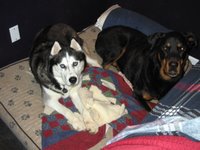 After these introductions, the people let me into their yard and house. There was a lot more space than in my run. There was dirt that I could dig and grass that I could scruff. There were plenty of soft places to nap. It was a wonderland! Best of all, I made fast friends with the Rottie, Bailey, and he is my new constant playmate. We share the loveseat. We share his bed. The lady says Bailey is “tolerant.” That must mean super excited because that’s how I feel!


Bailey is only a year older than I am, but he gets tired much more quickly. He says I will not stay in this home with him forever. I will find a new home with more nice people. I hope they have a doggie friend for me who is as energetic as I am. We could play race down the stairs and jump off the furniture and body slam each other. I certainly am a lucky Lucky!